5 Errors to Avoid When Configuring Your Office Partitions 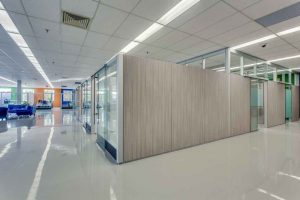 Office partitions have revolutionized the way 21st century businesses approach office design. They foster cooperative effort, create a sense of common purpose, reduce a company’s dependence on artificial light, help the HVAC system run more efficiently and give the office a state-of-the-art appeal that was never possible with drywall or cubicle farms. Another great advantage of movable partitions is that they give office managers the freedom to configure their office any way they choose and to reconfigure it at will. Occasionally however, this design freedom leads to errors that undermine the advantages partitions were intended to deliver.

Movable partition walls can be a boon to a company’s productivity but they can’t work their magic by themselves. Owners and office managers need to carefully consider the use and distribution of partition walls lest they wind up making one of the following common layout mistakes:

When designing the layout of an office using office partitions the most important thing to remember is to strive for balance. Balance private spaces with public spaces, closed spaces with open spaces and opaque walls with glass walls. And don’t forget to create common areas for brainstorming sessions and meetings.

For more information on the best ways to utilize movable partitions call IMT Modular on 416-743-4513 and speak to one of our friendly and knowledgeable sales associates.

Get a Quote Today